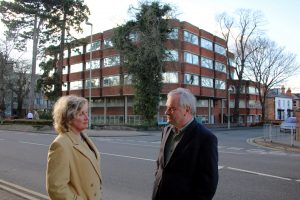 Gloucester City Council has been unable to collect nearly £700,000 in business rates because two office blocks in Gloucester have been laid empty for years.

The HM Revenue & Customs reduced the rateable value on 67 and 69 London Road to zero meaning the owners, Pall Mall Estates, do not have to pay business rates on either property.

It is understood that HMRC reduced the valuation to zero on the August 29, 2011.

Before the reduction the rateable value of both properties stood at £269,500 and meant that business rates were worth £118,732 per year to Gloucester City Council.

The properties were subject to a debate at the city council in May led by Liberal Democrat councillors Jeremy Hilton and Isabel Brazil, who represent Kingsholm Ward.

Their motion was passed unanimously calling for the buildings to be acquired for residential redevelopment, with a Compulsory Purchase Order being used if a reasonable purchase terms could not be agreed.

Councillor Hilton said: “The owners stripped out the services within the buildings a few years ago. This probably helped them secure a zero rating on their business rates.

“The loss of £700,000 in business rates since 2011 is scandalous. I understand the owners have had offers from potential buyers but turned them down.

“If they had to pay business rates on the office blocks they may have sold them by now.

“Private householders aren’t allowed to hang on to empty properties for year after year and not pay any council tax.

“Why should wealthy corporations get away with not paying their fair share of taxes? The system is corrupt.

Councillor Isabel Brazil said: “The buildings are run down and can no longer be easily let.

“The owners shouldn’t be allowed to sit on a property asset for year after year and not pay tax on them.

“The £700,000 lost in business rates could of been spent on supporting public services.”