At the weekend, Liberal Democrat group leader, Cllr. Jeremy Hilton wrote to Simon Roberts, the chief executive of Sainsbury’s about the proposed closure of their Northgate Street supermarket, which has been trading successfully for nearly 50 years.

Along with Lib Dem colleague Dr Rebecca Trimnell, Jeremy Hilton is raising an online petition, Save Our Sainsbury’s, which is doing well. Please sign it at:-

I was shocked to learn this week that your company is to close its supermarket at Northgate Street, Gloucester after nearly 50 years of successful trading. Many people that I represent, who live in Kingsholm are very unhappy about the store’s closure as they use it regularly.

My Lib Dem colleague, Dr Rebecca Trimnell, who is campaigning for the residents of the city centre has raised an online petition to save the supermarket. The returns are good.

I remember the store when it first opened as I had a Saturday job there as a teenager. I still shop in the store more than three times a week. Not only do residents of Kingsholm and city centre use it, but those working in the centre or other residents in Gloucester who are shopping in the city centre also pickup provisions before they go home.

I imagine the store isn’t the strongest trading store, but it must still be profitable as the investment in the building will have been paid off long ago. I have noticed you have been running down the variety of stock, which may have hit trade a bit, but it’s Covid-19 pandemic that has had a major impact.

However, trade is recoverable as we get through this pandemic. The city council is just about to invest in the refurbishment of Kings Square, which along with the regeneration around the bus and railway stations will bring in more people to the city centre. This will lead to an increase in footfall.

It would be so sad not to have a Sainsbury’s in the city centre while Tesco, Iceland and M&S will have a presence, but none of them can offer the same service and stock range that you can continue to do from Northgate Street.

Both Dr Rebecca Trimnell and I would appreciate meeting a senior representative of your company to discuss how we could keep the store open to mutual benefit.

Finally, the city council will discuss a motion in my name about saving the store on the 24th of September. 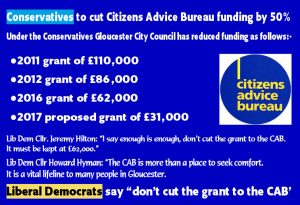 The Local Government Association (LGA), which represents 48 fire and rescue authorities in England and Wales, is calling on leading manufacturers to recall faulty tumble dryers which have been linked to thousands of fires caused by excess fluff contacting heating elements.

Government statistics show there were 2,190 tumble dryer fires between 2012 and 2014 – equating to three a day.

Homes have been ruined and in some cases, the machines have burst into flames as people loaded them with clothes. An inquest has opened into the deaths of two men who died after a tumble dryer caught fire.

The LGA is warning that companies who are running lengthy repair programmes for potentially dangerous machines, instead of recalling them, are risking the lives of millions of customers.

It is calling on manufacturers to recall affected tumble driers and for all white goods to have fire-proof markings on them, including the manufacturer, model and serial number, so they can be identified more easily if they are damaged after causing a fire.

“Firefighters are attending tumble dryer fires three times a day, which is alarming. These defective products are endangering lives, causing thousands of pounds of damage to homes and making people homeless.

“People’s safety must be the priority. It’s been months since some manufacturers issued safety warnings over their tumble dryers but they need to be recalled as these appliances are still causing fires – until they do so, consumers continue to risk falling victim to a devastating and tragic house fire.

“Fire-proof markings on all white goods would also help improve manufacturing and safety standards by helping fire investigators identify the make and model of any appliance damaged after causing a fire.

“Users must take simple precautions using tumble dryers. The compartment where fibres from fabric build up should be cleaned out after every load of clothes is dried, to reduce the risk of it igniting, and the vent or any other opening should not be covered.

“People should never leave tumble driers on overnight or when they go out. Anyone buying an electrical item should complete the guarantee registration to ensure goods which do not meet safety specifications are repaired, replaced or refunded. This also enables manufacturers to contact owners in the event of a product recall.
“People also need to ensure they have a working smoke alarm – which can be a life-saver – in the event something does go wrong and test them regularly, ideally once a week.”

Anyone with concerns about the safety of electrical appliances can report them to the Citizens Advice consumer helpline on 03454 04 05 06.