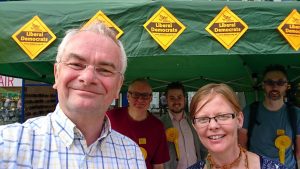 Liberal Democrats in Gloucester will be taking their campaign to remain in the European Union to Gloucester Pride on Saturday when party members will be handing out cards encouraging everyone to support having a People’s Vote on the final Brexit deal.

This campaign will proceed a major debate at the county council when councillors will be encouraged to support a Lib Dem motion calling for a People’s Vote on the Brexit deal. In proposing a new referendum Liberal Democrats will want there to be a option to remain in the European Union.

“Gloucester may have voted leave in 2016, but I imagine many people are now having second thoughts. The government’s handling of the Brexit negotiations is lamentable. Leave lied to the public. Boris Johnson has quit just as David Davies did before him.

“I will be urging all county councillors to back the Lib Dem call for a people’s vote on the final Brexit deal. It is imperative that the people of Gloucester and the United Kingdom have the final say on whether to proceed with Brexit or to remain members of the European Union.

“Leaving the EU will mean the loss of citizenship rights we now all enjoy. Currently we are able to work, study, live and retire anywhere in the EU. Our European Health Insurance Card provides health cover across all member states. These are benefits that are important to everyone, but especially so for the younger generation who are starting out on their adult lives.”

“We must also consider the negative impact that leaving the EU will have on many local businesses that trade within the Single Market.”

”I voted Remain in 2016 and I still believe that the UK should retain its full membership of the European Union. The evidence from the chaotic negotiations suggests that the best option is the status quo. It is also best option for Gloucester.

“I have spoken to many people who are worried about their own future, not only UK citizens but those EU nationals who live and work in the city. We cannot leave it to this incompetent government to make the decision on the final Brexit deal. The public must decide in a People’s Vote.” 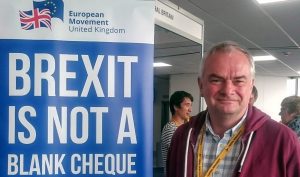 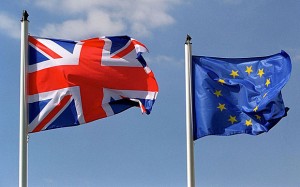 Forty-one years ago I voted yes to stay in the Common Market. I intend to vote yes again on Thursday with a positive vote to REMAIN in the European Union. A union of 28 countries working together peacefully to sort out issues of cross border importance, such as trade, the environment and security.

My primary reason in voting yes in 1975 was to make sure that European countries sorted out their differences around a table and not on a battlefield. I wanted to live my life in peace. I have never regretted my decision. I have seen the Common Market of nine countries grow into the European Union of twenty-eight.

In 1975 the continent was split between western democracies and socialist dictatorships. Spain, Greece & Portugal were becoming democracies and joined the EU in the early 1980s. Now the EU has a population of 508 million living in peace with each other and with governments co-operating over issues that affect us all. As Winston Churchill said “Jaw Jaw is better than War War”.

I have been concerned about the whole tone of the referendum campaign, particularly when I listen to those arguing to leave. I also think to myself; ‘I want my country back’. But, what I certainly don’t want is the UK run by a right wing clique of people who feed on people’s fears and concerns. Who stir up xenophobia and blame others for our problems.

I grew up in a country that was proud of itself and was an open and free society, working with other nations within international organisations such as the UN, NATO, the Commonwealth and the EU. I believe that if we leave the EU it will be a step backwards. We could see our country fall apart with Scotland leaving the UK and “Little England” left just floating in the mid-Atlantic with few friends.

As individuals we would lose our right to live and work anywhere in the EU. Our European Health Insurance Card will become invalid. Many of us will suffer from loss of work or earnings. Taxes may rise. We shall probably experience years of regret that we isolated ourselves from our friends on the continent.

I also want to address the nonsense espoused by leave campaigners that the EU is undemocratic, this is untrue. Every five years we elect MEP’s to represent us in the European Parliament, which amends and approves legalisation that the Council of Ministers’ support. The Council of Ministers includes an elected representative from every government. The European Commission acts in a similar way to our very own Civil Service.

I hope that everyone will think very carefully about the way they are going to vote on Thursday. This is not the time to bash the Tory government, we can do that at the ballot box at the next general election. This is a time to vote for our children’s future. In my view it will be much better for them if we remain in the EU.