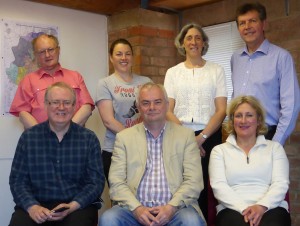 The seven Liberal Democrats councillors on Gloucester City Council met at the weekend to elect their leader and deputy leader, plus other group positions.

Cllr. Jeremy Hilton (Kingsholm & Wotton) will remain the group leader and his deputy will be Cllr. Declan Wilson (Hucclecote).

Jeremy Hilton: “We have a magnificent group of seven councillors and it will be our job to provide constructive opposition to the Conservative administration. We have a group with four new members and we have lots of fresh ideas on how we can make Gloucester a better place. Regeneration, housing and the environment will be our priorities.”

Declan Wilson said: “Before the election we drew up an action plan for Gloucester with a dozen ideas to make Gloucester a better city. We intend to promote this agenda on the council. We shall oppose the Tories when it sensible to do so and work with the other groups when it is in the best interest of Gloucester.”

One thought on “Liberal Democrats on city council announce spokespersons”