Here’s what David Cameron had to say about the Liberal Democrat plans for a £700 tax cut at the 2010 election debates…. 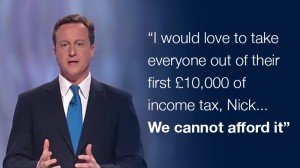 Now that we’re delivering it in government, the Conservatives are trying to pretend it was their idea in the first place!

The truth is, it’s only thanks to the Lib Dems that 24 million people are getting a £800 tax cut. Without us, it just wouldn’t be happening.

The income tax free threshold will be £10,600 in April this year, we intend to increase this still further so that no one earning less than £12,500 will pay any income tax at all.