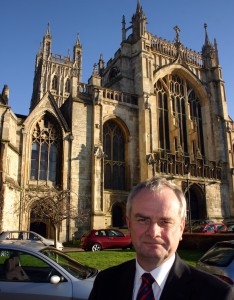 Gloucester Cathedral should become a UNECO World Heritage site according to the Liberal Democrats. On the 23rd January, Gloucester City Council will debate whether the council along with the Dean and Chapter should make a bid for the cathedral to become a World Heritage Site (WHS). Liberal Democrat leader, Cllr. Jeremy Hilton, is proposing the idea.

There are 16 world Heritage sites in England, including Canterbury Cathedral and Westminster Abbey. The Department of Culture, Media and Sport (DCMS) is responsible for the nomination of UK sites.

Gloucester Cathedral was built between 1089 and 1499. It has stood in heart of the city for nearly a thousand years. It is a fine example of English Cathedral design. Visitors can enjoy art and architecture from across the ages. The cathedral is listed as a top five UK visitor attraction in Which Magazine readers’ survey.

Jeremy Hilton said: “We should seriously consider bidding for Gloucester Cathedral to become a World Heritage Site. This would be a prestigious designation. It would help create a sense of pride for everyone who lives in Gloucester. It would surely boost the numbers of visitors to Gloucester. We should be bold and make a bid to the Department of Culture, Media and Sport.”

Cllr. Declan Wilson said: “Our proposal also mentions of “Project Pilgrim” that will see £5m invested in the cathedral building and grounds to improve visitor experience. When I first moved to Gloucester, I was impressed by the magnificence of the cathedral. It is one of the most impressive cathedrals in Europe and would make a great addition to the UK twenty five World Heritage Sites.”

Wording of the motion

“This council notes that Gloucester Cathedral is listed as a top five UK visitor attraction in Which Magazine readers’ survey.

This council notes and welcomes plans under Project Pilgrim to invest £5m in the Cathedral and its grounds.

That this council agrees to approach the Dean & Chapter to consider whether to apply to the Department of Culture, Media and Sport for Gloucester Cathedral to be listed as a UNESCO World Heritage Site.”