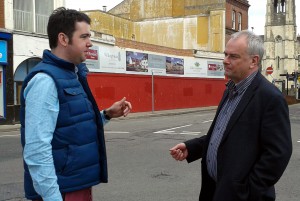 Sebastian Field & Jeremy Hilton discuss the regeneration of the former Kwik Save site, which is in the background

Planning permission to build 119 flats with four ground floor retail units on the former Kwik Save site along Northgate Street and Black Dog Way was agreed three years ago. In the last three years no work has taken place to start construction of this regeneration project.

Leading Liberal Democrat city councillors Sebastian Field and Jeremy Hilton have written to the leader of Gloucester City Council seeking a meeting with the developers about why this crucial city centre new homes project has not started.

Deputy Leader Sebastian Field said: “We need new homes in Gloucester and this is a brown field site with permission for 119 residential apartments. I urge the developers to start construction work.”