Graphic safety messages should be displayed on all e-cigarette chargers say fire authorities, after shock new statistics show a surge in fires connected to the devices.

Latest reported figures from fire services up and down the country reveal that since 2012 they have attended 113 calls to e-cigarette-related blazes. There were just eight call-outs in 2012 but this soared to 43 last year and there have been at least 62 so far this year. This means firefighters are now dealing with e-cigarette related incidents at more than one a week.

The Local Government Association (LGA), which represents all 46 fire and rescue authorities in England and Wales, fears that these are the “tip of the iceberg” and many cases go unreported. The warning comes during national Electrical Fire Safety Week, which is run by the Electrical Safety Council charity. E-cigarettes have rocketed in popularity and are now used by an estimated 2.1 million Britons each year.

These latest statistics come just weeks after a 62-year-old man died when an e-cigarette battery on charge exploded and ignited oxygen equipment he was believed to have been using.
Fire chiefs say many blazes are taking place because smokers are not using compatible chargers. This means too much current goes into the batteries and they overheat and eventually explode. Battery material shoots out – up to two to three metres in distance – and can cause a fire if it lands on anything combustible.

Now the LGA is calling for e-cigarette manufacturers to do more to warn of the dangers. This includes displaying prominent safety warnings, highlighting this issue, on e-cigarette kits and chargers.

Cllr Jeremy Hilton, Chair of the LGA’s Fire Services Management Committee, said: “The spiralling upward trend of fires connected with e-cigarettes is a major cause for concern and much more needs to be done to combat it. We expect this to continue to rise as more smokers switch to e-cigarettes. Alarmingly, there is no way of knowing the true figure as we understand many cases are going unreported.

“We are urging e-cigarette manufacturers to introduce clear, prominent and graphic new warnings spelling out to users the dangers of using incompatible chargers with e-cigarette batteries.

“Tragically, at least one life has been claimed and more fatalities could follow unless this issue is addressed rigorously and robustly.

“We are warning users that it is simply not worth risking their lives to save a few pounds by buying dodgy, dangerous or incompatible chargers”
Ends…

E-cigarette users are advised to follow these safety tips when charging:

* Always use the correct charger and follow the manufacturer’s instructions
* Never charge a battery that has signs of damage, that has been dropped, or has been subjected to impact
* Never plug a charger into a non-approved mains power transformer
* Check that your e-cigarette battery has overcharge or overheat protection
* Remove the battery from charge when complete – don’t over charge
* Never leave a battery on charge unattended
* Don’t use if wet or exposed to water
* Do not over tighten the atomiser or when connecting to charger
* Ensure that you dispose of batteries correctly.

Disadvantaged primary school pupils in Gloucestershire are set to receive £18.27 million to boost attainment, the Liberal Democrats have announced. The pupil premium funding for 2015/16 will help teachers support those children at most risk of falling behind their colleagues. It means primary schools will receive £1,320 for every pupil who has registered for free school meals at any time in the last six years. Evidence shows raising the attainment of pupils by the end of primary schools has a direct impact on future exam results.
Liberal Democrat county group leader, Cllr. Jeremy Hilton said:
“Every child should be able to reach their full potential, whatever their background. The pupil premium will get extra money to schools in Gloucestershire, targeted at the children who need it most. The whole class benefits when fewer children are struggling. Teachers in Gloucestershire do a great job, and I can’t wait to see how they use this additional funding to help all our children and young people succeed.”
Liberal Democrat Schools Minister David Laws said:
“In government, Liberal Democrats are building a stronger economy and a fairer society, with opportunity for everyone. We have already protected school budgets, introduced the pupil premium and expanded early years education for the very youngest children. This additional funding is another boost for schools in Gloucestershire Liberal Democrats are determined that teachers will continue to have the resources they need to give all pupils the best possible start in life, regardless of their background.”
ENDS… 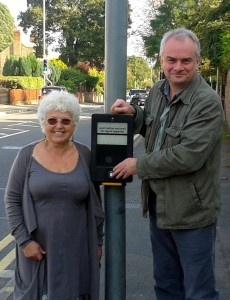 On the day that Gloucester City Football Club secured planning permission for a new stadium at Meadow Park, Liberal Democrats were debating the future of football at our Glasgow conference. It was good to listen to my old friend Paul Baker, the chairman of Cheltenham Town FC, who has kindly provided the Tigers with a home in the last few years. The Tigers have been homeless for the last few years since the old ground was flooded back in 2007.

Following on from this debate, delegates debated and voted on the party’s pre-manifesto policy paper “A Stronger Economy and a Fairer Society”. The debate was introduced by the Schools Minister, David Laws MP, who is also in charge of writing the party’s manifesto. He has been consulting members widely on what we want to do if in government again for the next 5 years.

David Laws is the minster responsible for introducing Free School Meals for year one and two infant school children in September this year, saving a family £420 a year for every child in this age group. Liberal Democrats will extend free school meals to all children in primary education, as resources allow.

During the day I also had a one to one meeting with an officer of the Association of Liberal Democrat Councillors to discuss the 2015 local election campaign in Gloucester. Next year we shall have elections to the city council on the same day as the general election. Polling Day, May the 7th, will be an important day for Gloucester and the country.

In his keynote speech to conference Vince Cable the Business Secretary cracked one of the best jokes of the day when he reminded delegates of the time when Gladstone spoke for five hours without notes, but didn’t forget what he was talking about, unlike the recent speech by Ed Miliband when he forgot to mention the deficit. Vince Cable also reminded conference how the coalition government had created almost 2 million apprenticeships since 2010.

The major speech of the day came from the Chief Secretary to the Treasury, Danny Alexander MP. As our senior Scottish MP in the cabinet, Danny started his speech by thanking everyone who helped in the Scottish Referendum, in support of the No campaign. He also reaffirmed Liberal Democrat policy that we should have votes for 16 & 17 year olds in all elections as they did in the referendum.

Danny said Liberal Democrats should be proud that we gave the country strong government in 2010 at a time when we needed it most. He reminded delegates that Labour had bankrupted the country and that they should never be trusted to run the country by themselves again.

Since the Liberal Democrats had been in government, 27 million people had benefited from income tax cuts by the raising of the threshold to £10,500. This is something David Cameron said could not be done during the 2010 election campaign. Danny Alexander said we would raise the tax free threshold to £12,500 in the next parliament. This could only be guaranteed to be done fairly by Liberal Democrats being in government next time.

Danny Alexander said Liberal Democrats would borrow less than Labour and cut public spending less than the Tories. He said we would insist on a fairness rule on any changes to tax and benefits.

Liberal Democrats are meeting in Glasgow for the annual conference. Saturday the conference started with hustings for the election of our new party President to take over from Tim Farron, who is stepping down. There are four candidates, former MEP Liz Lynne, Baroness Sal Brinton, Linda Jack and Daisy Cooper. The winning candidate will be chosen in a postal ballot of all party members.

During the day passionate speeches were given by two senior Lib Dem government ministers Lynne Featherstone and Simon Hughes both highlighting the many achievements that have been made that would not have happened if the Lib Dems had not been in government. For instance, £35 million has now been given to tackle Female Genital Mutilation (FGM), scrapping of ID cards and reduced detention without charge to 28 days.

The highlight of the first day was the Conference Rally, which Jo Swinson, Paddy Ashdown and Nick Clegg spoke to a packed house in the main auditorium.

Nick Clegg told conference delegates that only the Liberal Democrats could provide Britain with a strong economy and a fairer society. He asked people to imagine what life would be like with a Tory or Labour majority government. The Tories could not deliver a fair society and Labour cannot be trusted on the economy. Liberal Democrats will fight “tooth and nail” to prevent either of them forming a majority government.

Locally Liberal Democrats will be fighting hard to win so that we can deliver a stronger economy and fairer society here in Gloucester, as well.