The rose garden at the corner of London Road and Great Western Road has seen some changes, as the city council carried out improvements to discourage anti social behaviour at this public space.
The brick wall at the back of the garden and the planter have been removed to stop street drinkers from sitting there. The boundary wall has also had some work done to it.
The work has been partially funded from a devolved budget that requires the approval of ward councillors, before the money can be spent.
Jeremy Hilton said: “The removal of the brick wall takes away a place for street drinkers to sit.
“There is still work to do to improve the garden, but we have made a start. I was more than happy to approve the work.”
Sebastian Field said: “This is an important open space along London Road.
“The drinking of alcohol is not allowed. I hope the changes being made, will reduce incidents of anti social behaviour.” 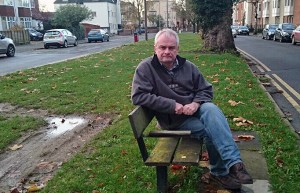 Jeremy Hilton at the grassed central reservation along Denmark Road

Liberal Democrat councillor for Kingsholm & Wotton, Jeremy Hilton has called on rugby fans to stop using the grassed central reservation along Denmark Road (dual carriageway section) as a carpark. The next home match for Gloucester Rugby is on the 20th December when the Cherry & Whites take on Bath.

Jeremy Hilton said: “The grass central reservation along Denmark Road is not a carpark. I ask rugby fans to park elsewhere, otherwise they will get a parking ticket. 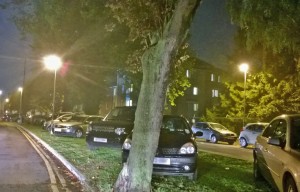 Cars parked up during match on the 19th September

“Often it is latecomers who use this open space to park up their cars in their rush to get to the game. The next match against Bath will draw the crowds and it is important that the traffic enforcement officers are on patrol until well after the game starts.

“The club contributes financially to the cost patrolling the streets of Kingsholm during match days. I have asked the parking enforcement team to patrol local roads and book those who park illegally. It is not just in Denmark Road that there is a problem. You can see cars parked up on double yellow lines in other streets in Kingsholm.

“It is great that Gloucester will be a venue for the Rugby World Cup next year. However, the problem of illegal parking must be resolved. The RWC will be good for local businesses, but fans to need to park their cars legally and with consideration to local residents.” 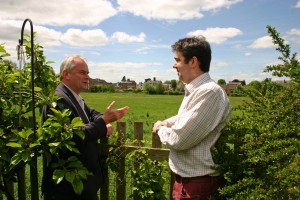 The annual cost of residents’ parking permits is to go down to £50 from the 1st May. The current price is £80 per year.

The decision to cut the price of the permits by 37.5% is all down to the Liberal Democrats who successfully moved an amendment to the county council budget when it was set in February.

The two wards that will mostly benefit are Kingsholm & Wotton ward and Westgate ward.

Jeremy Hilton (Kingsholm & Wotton) said: “It has been a long hard battle to get the cost of the residents’ parking permits reduced. It was wrong for the county council to overcharge for the cost of a permit. They were making a profit of £30. Now the price of the permit is the same as the cost of administration and enforcement.”

Sebastian Field (Kingsholm & Wotton) said: “Hopefully people living in streets with a permit scheme will be delighted with this news. £50 per year is better value than £80.”

Howard Hyman the Liberal Democrat candidate for Westgate ward said: This great news for city centre residents. Having the cost of their parking permit slashed by 37.5% is a job well done by Liberal Democrat councillors serving on the county council.” 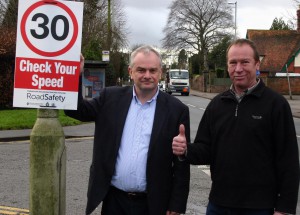 Advisory 30 mph speed check signs have been erected along Tewkesbury Road in Gloucester to encourage motorists to obey the speed limit. They have been installed at the request of Kingsholm & Wotton County Councillor Jeremy Hilton following complaints about motorists speeding along the road.

Jeremy Hilton said: “Tewkesbury Road is a wide road and motorists do tend to speed along it, thinking it is a 40 MPH zone, especially if they have just come off the Northern By-pass. The speed limit here is 30 MPH. The signs will remind motorists to slow down.”

Mike Whyham, who will be the candidate for the Liberal Democrats in Longlevens said: “Local residents have been worried about traffic speed along Tewkesbury Road for some time and the difficultly this places on pedestrians trying to cross the road. I am very pleased that Gloucestershire Highways listened to our request and put up the speed check signs.” 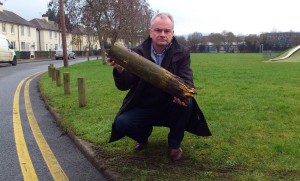 Jeremy Hilton holding one of the rotten bollards

A large number of wooden bollards along the perimeter of Sebert St Rec’ are missing or rotten. They were put in to stop cars being parked on the Rec’ a problem that was evident on match days.

On making a request for new bollards, Liberal Democrat Cllr. Jeremy Hilton was told that the city council policy had changed and that the bollards would not be replaced.

Jeremy Hilton said: “I have written back to the council and demanded that the bollards are replaced to ensure the safety of children playing on the Rec’ and to make sure rugby fans don’t use the area as a car park.

I understand that the council is costing the replacement of the bollards. I am now waiting for a reply. I shall not be content until the bollards are replaced.”