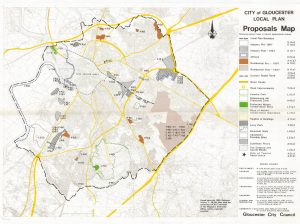 Gloucester City Council is to debate a motion from the Liberal Democrat group, at council on Thursday. The Lib Dems are calling for a new City Plan for Gloucester, which will be an up to date set of polices that will become the development framework for Gloucester for the next few years.

Lib Dem leader, Cllr. Jeremy Hilton (Kingsholm & Wotton) said: “The last adopted development plan dates back to 1983. Its 33 years old and a lot has changed in Gloucester since then. Both Labour and Conservative administrations, in that time, have failed to get updates to the plan adopted as required by the government. We are asking the cabinet member for housing & planning to report back to council in September on how he intends to deliver a new City Plan. We want it adopted as a matter of urgency.”

The current timetable for approving the new City Plan was for it to be approved by council in time to go to the planning inspector in the winter of 2016 for adoption in 2017. Liberal Democrats are concerned that the delays in approving a new City Plan could allow a developers to override current polices arguing they are out of date, despite many being formally being ‘saved’ by the Secretary of State for Communities and Local Government in 2007.
Cllr. David Brown (Hucclecote), Lib Dem spokesperson for housing & planning said: “The city council have a timetable to deliver the City Plan but due to the delay in adopting the Joint Core Strategy (JCS) it is now woefully outdated. We need the council to be able to work with developers from a position of strength, with a clear plan for the city, a plan that best benefits current and future residents. For that we need a City Plan that is fit for the future sooner rather than later.”

The new City Plan should be a development document that sits beneath the JCS. It must explain how the council will implement the spatial vision and strategic objectives in the JCS up to the year 2031 and provide criteria that it will apply when considering planning applications for different types of buildings or other development.

Jeremy Hilton said: “In the last few years there has been a big increase in the number of people who rent their homes in the private sector. There are good landlords and there are rogue ones.

“Most people just have a six month short-hold tenancy agreement. Tenants can be given just two months notice once the six month tenancy ends. This means tenants having just 8 months to live in their home before they have to move out. Imagine moving home every 8 months out of no choice of your own. I believe this is unfair and disruptive to family life.

“I am pleased that the Liberal Democrats will encourage more multi-year private sector tenancies. They will have an agreed inflation linked annual rent increase built in. This would protect the tenants and reassure the landlord the rent keeps pace with inflation.”