Redrow Homes has appealed to the Secretary of State about Gloucester City Council’s non-determination of their planning application to build 89 dwellings on the former Civil Service Sports Ground off Estcourt Road. Application reference 16/00968/FUL.

This controversial application raised many objections from local residents when it was originally deposited with the council in 2016.

The deadline for comments to the Planning Inspectorate from the public was the 9th of August this year. Jeremy Hilton’s letter is below.

Gloucester City Council has still to respond. Within a few weeks the council will take its response to the planning committee for approval, before it is sent to the Planning Inspectorate. 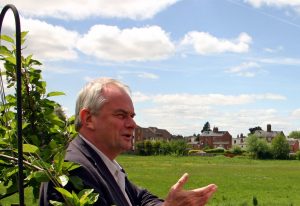 Jeremy Hilton fighting to save the Civil Service Sports Ground

I write to ask you to dismiss the appeal by Redrow Homes related to the planning application for 89 houses on the former Civil Service Sports Club ground (Ref:16/00968/FUL).

I am the local county and city councillor for Kingsholm & Wotton.

On the 19th of April 2017, I did write to the case officer at Gloucester City Council pointing out that the application was then seven months old and that it should be determined with a recommendation to refuse.

The council said they were giving more time to Redrow to resolve the issue about the loss of sports pitches. Redrow had not in April 2017 nor since provided evidence on how they would mitigate for the loss of the playing fields.

There is a shortage of rugby and football pitches in Gloucester. Spartans Ruby Club, which is based in Kingsholm, is looking for an additional pitch near to its club house, which is in neighbouring Sherborne Street.

The High School for Girls, which is in Denmark Road has also spoken to me about possible use of the sports field if it is saved from development.

All Redrow have done since acquiring the site in 2011 (for just £10,000) is shut the gates and demolish the club house etc, making the facilities unavailable for active sport that it had previously been used for.

Similarly, since acquiring the site Redrow have failed to properly discuss the future of the playing fields with the local community that is required in the Joint Core Strategy policy INF4. The lack of community engagement is lamentable.

Redrow’s idea of consultation has been to lodge two full planning applications with the council, leaving no opportunity for the council or the community to hold discussions about how the site could be developed for some housing, but leaving the rest of the site available for sport and recreation.

As Keith Annis a senior manager at Redrow once told me they were playing for time. The question must be asked why has it taken them nearly two years from depositing the planning application to lodge an appeal?

For Redrow to appeal against non-determination is rather hypocritical, particularly to do this only a few weeks after lodging a new planning application for 100 dwellings on the same site (Ref 18/00306/FUL)

The plan for affordable homes did not meet the council’s then standard, when the application was submitted, which was 40 %. The application lists 18 dwellings as intermediate housing, this is equates to 20% of the build.

It was impossible for the council to approve an application that did not meet this standard. Subsequently, the Joint Core Strategy has been adopted, where the new limit is set at 20%.

I believe it is this legal agreement that is responsible for the maximisation of housing on the site rather than what one would expect an open discussion with the council and community on a development brief that would benefit all.

Some degree of housing whilst retaining the main sports field for sport and recreation, would benefit everyone.

It may be that the land has not been used for sport for more than five years, but that is because of a deliberate policy by the landowners to close the ground for sporting activities.

I concur with Sport England that the application should be refused.

The applicants have failed to identify alternative facilities that could accommodate sporting activities that previously took place on the Civil Service Sports ground.

In my opinion, alternative provision must be within the Kingsholm & Wotton ward.

The proposed development of 89 dwellings in my opinion is not consistent with JCS policy on green infrastructure. The former Civil Service Sport Ground provides a worthy green infrastructure asset that should be protected to help resolve the shortage of open space in Kingsholm and Wotton.

I believe it is not beyond the wit of all parties to come up with a development solution that would provide much needed housing whilst retaining a large open space that could continue to be used for sport and recreation.

1. The green infrastructure network of local and strategic importance will be conserved and enhanced, in order to deliver a series of multifunctional, linked green corridors across the JCS area by:
i. Improving the quantity and/or quality of assets;
ii. Improving linkages between assets in a manner appropriate to the scale of development, and
iii. Designing improvements in a way that supports the cohesive management of green
infrastructure;
2. Development proposals should consider and contribute positively towards green infrastructure, including the wider landscape context and strategic corridors between major assets and populations. Where new residential development will create, or add to, a need for publicly accessible green space or outdoor space for sports and recreational on, this will be fully met in accordance with Policy INF4. Development at Strategic Alloca ons will be required to deliver connectivity through the site, linking urban areas with the wider rural hinterland
3. Existing green infrastructure will be protected in a manner that reflects its contribution
to ecosystem services (including biodiversity, landscape / townscape quality, the historic environment, public access, recreation and play) and the connectivity of the green infrastructure network. Development proposals that will have an impact on woodlands, hedges and trees will need to include a jus ca on for why this impact cannot be avoided and should incorporate measures acceptable to the Local Planning Authority to mi gate the loss. Mi ga on should be provided on-site or, where this is not possible, in the immediate environs of the site
4. Where assets are created, retained or replaced within a scheme, they should be properly integrated into the design and contribute to local character and distinctiveness. Proposals should also make provisions for future maintenance of green infrastructure.

As I have previously mentioned the lack of serious community engagement by Redrow ahead of this planning application, about the future use of the site, is lamentable.

Redrow have only showed plans that have proposed the complete building on the site, with the loss of the playing fields. They have never properly consulted anyone.

1. Proposals to develop land or buildings currently or previously in use as a community facility will demonstrate, including evidence of engagement with relevant local community groups and partner organisations, why the facility is no longer required and, as appropriate, how, when and where suitable local replacement facilities will be provided. Provision of replacement facilities will have regard to the locational and other relevant elements of this policy
2. Where new residential development will create, or add to, a need for community facilities, it will be fully met as on-site provision and/or as a contribution to facilities or services o -site. New or refurbished provision will be of an appropriate type, standard and size. From an early stage, developers will be expected to engage with the relevant local authorities and infrastructure providers and, as appropriate, relevant local community groups where they exist, to ensure that new provision meets the needs of the community that it will serve and is t for purpose
3. Social and community infrastructure should be centrally located to the population it serves and
be easily accessible on foot and by bicycle. It should be located so as to have the potential to be well-served by public transport. Developers should aim to provide flexible, multifunctional facilities within mixed-use developments, creating shared space which maximises benefits to the community and minimises land-take. In the case of open space, ‘easily accessible’ means it is located within reasonable walking distance of the development it serves. New facilities should be accessible to all members of the community, and be planned and phased in parallel with new development.

The provision of 89 dwellings is in my opinion is overdevelopment of the site, which is in the heart of Kingsholm.

Council policy as identified in the draft City Plan, which was approved by council in December 2016, recommends a maximum of twenty dwellings (SA06).

The proposal of 89 dwellings exceeds this policy by 445%, with the complete loss of the playing fields.

A compromise of 40 dwellings, for example, on this site would mean that the former sports field could be brought back into use.

G. Layout of the site:

The layout of the site does not follow the usual street pattern that is evident in Kingsholm. It is adjacent to both the Kingsholm and Denmark Road conservation areas.

I am concerned that the narrow streets on estate may be become clogged up with motorists parking their cars on footpaths. This is a problem that will be exacerbated during times when there are rugby matches being played at the Kingsholm stadium.

The small public open space is set out to give the impression that it is an exclusive space just for the new residents of the estate. New public open space should laid out to be inclusive and available to all Kingsholm residents.

I am not convinced by the design of the access point onto Estcourt Road slip road.

The proposed access onto Denmark Road is unacceptable. It closes the slip road to Lansdown Road and removes much-needed parking spaces on Denmark Road.

The closure of the slip road will create more vehicle conflict at the other junction with Lansdown Road. This will be a particular problem when school coaches use this junction.

The closure of the slip road will also remove the u-turn provision it provides for the houses serviced off the dual carriageway section of Denmark Road on the south side.

Kingsholm & Wotton has a low level of public open space as identified in the city council’s open spaces strategy. The council’s standard is 2.8ha per 1000

An opportunity is being missed in the proposed development to achieve a good increase in public open space provision in the ward by the wholesale development of the site, which was formerly used for sport and recreation.

I would recommend that this appeal is dismissed.