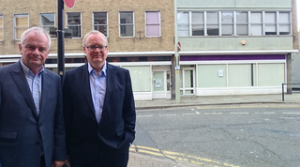 Jeremy Hilton & Declan Wilson with 92-96 Westgate Street in the background. This would be the new, much smaller customer advice centre for the city council. Drop in appointments to be ended.

Gloucester City Council should suspend its planned move of its offices to Shire Hall, say the Lib Dems. The current plan is for the city council to be based on the fifth floor at Shire Hall from 1st April 2019. Shire Hall is the headquarters of the county council.

The Liberal Democrat group says the business planning behind the project is ill thought out and the office accommodation will be temporary, too small and the financial savings unsound.

“Gloucester City Council under Conservative control really is becoming a ‘vanishing council’. The council lacks ambition and is unable to plan long term. The Conservative administration is exhausted and has run out of good ideas. Moving to Shire Hall is a desperate stop gap position. It attempts to save money but doesn’t. The move should be suspended to allow for a full reappraisal.

“The accommodation at Shire Hall and 92-96 Westgate Street amounts to just 1,175 sqm. This is 78% smaller in size compared to the 5,290 sqm at Herbert, Kimberley and Phillpotts warehouses at the Docks. The Tory cabinet has still not provided opposition councillors with the plans on how it will all be squeezed into such a small space. The public reception advice centre on Westgate Street will be tiny, just 123 sqm compared to current 377 sqm.

“The council has yet to secure an agreement with the Canals & River Trust about altering the covenant on Herbert, Kimberley and Phillpotts warehouses. Until this is sorted, the buildings cannot be put up for sale. We must not leave these grade II listed buildings empty whilst we find a buyer. In the past, two empty warehouses in the Docks have been destroyed by arson. This could happen again. We should not move out until we have sold the buildings to new owners who have obtained planning permission.

“The city council needs to acquire new accommodation for the long term. It requires space to grow, especially if the council ends the Amey streetcare contract and brings the service back in house. We should build new offices in the Kings Quarter next to the new bus station. This would help kickstart the regeneration of the immediate area. It would be a bold move repeating the success of the council’s move to the Docks in the 1980’s.

“The move to Shire Hall is poorly thought out. The financial savings are unsound. The council will still have to pay business rates, the Docks service charge, insurance and security amounting to well over £250,000 per year on HKP warehouses until they have been sold. This is more than double the £102,000 savings suggested in the cabinet report. The council must reassess. The business plan is flawed.”