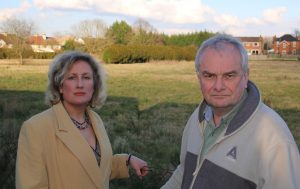 Plans have been submitted to build 100 homes on the grounds of the former Civil Service club in Kingsholm.

Liberal Democrat councillors are opposed to so many properties being built on the Estcourt Road site because it will take away valuable green space for local people.

The application by Redrow Homes to Gloucester City Council is an increase of 11 properties on a previous application of 89 homes, which is yet to be determined by the planning committee.

Councillor Jeremy Hilton, who represents Kingsholm Ward on the city council, said the new application is in contravention of several council polices.

“The area has less public open space than the council says is necessary for the local population,” said Councillor Hilton.

“This application will take away valuable green space in the heart of Kingsholm. We do need more houses, but not so many at this location.

“The council’s draft city plan says the maximum on the site should be 20. This would leave the large field untouched and available for sport and recreation.

“Sport England raised objections to the previous application of 89 houses I imagine they will do the same for 100 dwellings.”

It is expected that the council will receive many objections as it did on the previous application, added Councillor Hilton.

“We are supporting plans for new housing on London Road and off Great Western Road, but the maximum permitted at Civil Service Club must be 20.”

Councillor Hilton added: “Redrow has been unable to find an alternative sports site nearby, so they are proposing as a sop to the council a cash contribution to be spent on sports fields in the south of Gloucester.

“Kingsholm will lose out. This is unfair.”

Both councillors are recommending that local people send in individual letters of objection, which can be also be done online at www.gloucester.gov.uk The planning document reference is 18/00306/FUL