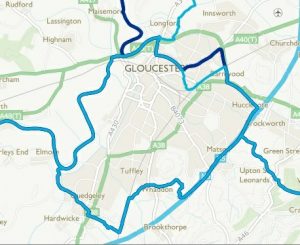 New boundary map showing the loss of Elmbridge to the Gloucester Parliamentary Constituency.

The Liberal Democrats have branded proposals to move Elmbridge out of Gloucester and into Tewkesbury as “daft”.

The Boundary Commission for England has suggested in its latest review of parliamentary boundaries that the Elmbridge area of Gloucester be represented by an MP from a town 12 miles away.

It would see Elmbridge joining the neighbouring Longlevens in Tewkesbury, so that Quedgeley can be retained in Gloucester, rather than moving to Stroud.

The Liberal Democrats have long argued for Longlevens to return to Gloucester and have criticised the Boundary Commission for England for ignoring community and identity and concentrating on the numbers.

Councillor Jeremy Hilton, leader of Gloucester Liberal Democrats, said: “These new proposals are just daft – the heart is being ripped out of Gloucester. The proposal to move Elmbridge comes as a complete shock as the previous plan gave no indication to the loss of Elmbridge.

“I’m pleased Quedgeley has been retained within the Gloucester parliamentary constituency as residents identify far more with Gloucester than Stroud.

“We thought the Boundary Commission had agreed to returning Longlevens to Gloucester.

“The furthermost boundary of Longlevens is just a mile from the city centre. You can hear the roar from Kingsholm on match days – yet Longlevens is represented by an MP from a town 12 miles away.

“The same applies to Elmbridge, which under these proposals will be joining Longlevens in Tewkesbury.

“The Boundary Commission says the City of Gloucester is too large to be a single constituency. The reduction in the number of MPs and the 5% variation in constituency sizes is hurting Gloucester.”

Councillor Hilton added: “It is very unlikely these proposals will be implemented as the DUP and many Conservative backbenchers will not support them.

“I would urge Gloucester MP Richard Graham to vote against these proposals.

“The Government should stop wasting tax-payers’ money and pull the plug on this review. Legislation to review parliamentary boundaries also needs amending.”