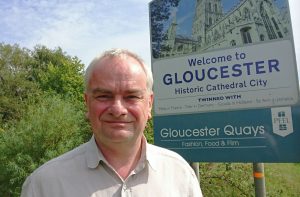 Jeremy Hilton at the entrance to the City of Gloucester, next to a sign promoting the cathedral

Plans to rename Gloucester a royal city have been condemned as a “marketing gimmick” by Liberal Democrat councillors.

The city council is considering whether to petition the Government to become The Royal City of Gloucester.

Council leaders will not press ahead with the idea if local residents are against it.

Councillor Jeremy Hilton, local Lib Dem leader, is against renaming Gloucester saying council bosses have not given any details about the costs of rebranding the city.

“It’s a marketing gimmick, pure and simple, and will make no difference to the people of Gloucester. It would be disrespectful to the Queen to seek royal status just as a marketing ploy,” said Councillor Hilton.

“Tourists flock to Gloucester for the cathedral, the docks and 2,000 years of history. Putting ‘royal’ in the title is not going to make a jot of difference to that.

“Instead of wasting his time renaming Gloucester Paul James should focus on regenerating the city centre.

“Kings Square is a mess, too many shops lay empty and the subway under the railway station is an absolute disgrace. The city is covered in litter and we have no decent public toilets.

“Sorting these problems out will bring more tourists to Gloucester and give local people a city to be proud of, not creating a cynical PR marketing campaign.”

Gloucester has a rich royal heritage – Edward II is entombed in the cathedral and Henry III was crowned King in 1216.

“But Gloucester’s most recent royal connection was in 1643 during the Siege of Gloucester when the forces of King Charles I lay siege to the city,” said Councillor Hilton.

“The Parliamentary forces successfully withheld the King’s onslaught to prevent Gloucester from falling. Fifty people lost their lives or were wounded defending the parliamentary cause from 10 August and 5 September 1643. This is now remembered each year with Gloucester Day, which takes place on the first Saturday in September. We should be proud of our history and our defence of parliament.

“Following the return of Charles II to the throne, the King took his revenge upon Gloucester by having its walls torn down and drastically reducing the size of the city’s administrative boundaries. Let’s not disrespect our history.”