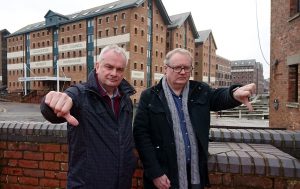 Liberal Democrats have announced their opposition to the loss of 60 jobs at Gloucester City Council. They have condemned the move which sees the number of staff employed dropping by 24% from the current establishment. The proposal to axe 60 job comes from the Conservatives who control the council.

Gloucester City Council is to see its funding from the Conservative government cut by £1.755m. Already the council has failed to fill 30 vacancies and another 30 jobs will be lost next year. Liberal Democrat councillors have said the staff shortages have led to delays and non-delivery of vital improvement projects.

Lib Dem leader, Cllr. Jeremy Hilton said: “The loss of so many jobs will have a major impact on council services. Sixty fulltime jobs going equates to 102,120 hours of support for key projects being lost forever. Already we are suffering from a diminished service from the council and it is going to get worse. Important improvement projects will not get done or will be delayed. It’s depressing. The Tories seem hooked on perpetual austerity.”

Lib Dem Deputy leader, Cllr. Declan Wilson said: “The blame for the loss of so many jobs must be shared between the Conservatives on the council and at Westminster. Budget cuts go on forever. This year the funding from Whitehall is being slashed by 18%. This is grossly unfair. On top of that we have had mismanagement of the council’s finances by the Tories leading to extra avoidable costs. The leader should apologise personally to the staff that will lose their jobs.”