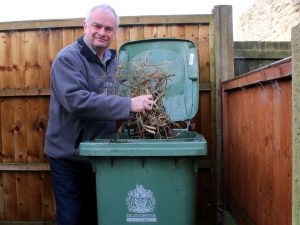 Gloucester Liberal Democrats have condemned the recent announcement by the Conservative controlled city council that charges for collecting garden waste are going up by 22%. Lib Dems have described the ‘garden waste tax’ as ‘daylight robbery’. They blame the Conservative council and government in equal proportion.
The current charge for garden waste collection is £36 per year. The charge was introduced in 2011 to cover the cost of collection on this non-statutory service. Lib Dems discovered in 2016 that the council was profiteering from the collection by around £6 per bin, making a profit of £110,000 a year. The Tories now propose to increase the charge to £44.
Lib Dem leader, Jeremy Hilton said: “Last year we tried to reduce the charge to £31 to just cover the cost of collection. Both Labour and Tory councillors rejected our proposal. Now the Conservatives plan to increase the charge to £44. This is a tax on responsible householders who recycle their garden waste. It’s daylight robbery.”
Lib Dem Deputy leader, Declan Wilson said: “The council’s finances are dire and the Tories are penalising responsible householders. We should be encouraging recycling not taxing it. The Tories will be making a profit of £13 on every green bin. This a profit margin of 30%. Local gardeners are going to have to empty their pockets to cover the financial mismanagement of the council by the Conservatives. It’s unfair.”