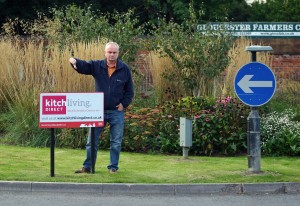 The Tory controlled city council has erected advertising boards on the three roundabouts along Estcourt Road. They are also doing this across Gloucester.

The decision to install advertising boards has been questioned by Liberal Democrat councillors. It is understood that the council will get a paltry £10,000 from the advert boards across the city.

Planning approval was done, unusually, under officer-delegated powers. Normally planning applications by the council have to come to the planning committee.

Liberal Democrat councillor Jeremy Hilton (Kingsholm & Wotton) said: “The Tories have used stealth methods to get advertising boards installed. The scheme was developed with the cabinet member, who failed to take a written report to cabinet. Local councillors were not consulted by cabinet on this scheme ahead of decision to go ahead. Then planning permission was granted under officer-delegated powers.

“If the Tories get their way, the three roundabouts in question will be blighted for the next five years. They are an eyesore and a distraction for drivers. I shall be fighting to get these removed. We don’t need this tacky advertising blighting the roundabouts in Kingsholm & Wotton or the rest of Gloucester.”