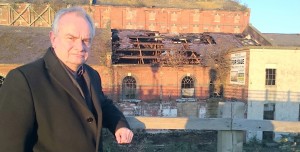 Liberal Democrat parliamentary candidate for Gloucester, Cllr. Jeremy Hilton has praised the fire and rescue service for their quick action in saving one of the derelict warehouses at Bakers Quay on Monday 5th January. The site has a number of listed buildings on it and it is subject to a regeneration plan approved by the city council in 2006.

The fire service arrived before 5pm on Monday evening with six fire appliances to contain and put out the fire, with the last appliances leaving at 9pm.

The roof and first floor of the two-story warehouse next to Llanthony Provender Mill was badly damaged by fire.

Jeremy Hilton has called on the city council to consider using its compulsory purchase powers to acquire Bakers Quay to enable the regeneration of the site as has been achieved elsewhere in Gloucester Docks.

Cllr. Jeremy Hilton said: “The work restoring other warehouses in Gloucester Docks and the Quays shows what can be done to improve former listed industrial buildings. It is time action was taken to achieve the same at Bakers Quay. The council approved outline planning permission for this site in 2006. It will be renewing this permission in few days. This recent fire shows how these historic warehouses are at risk. Compulsory purchasing Bakers Quay and working with a reliable private investor to regenerate the site seems to be the best option.”

Cllr. Hilton’s proposal to ask the leader of the council to consider using compulsory purchase powers will be debated at the city council meeting on the 22nd of January.