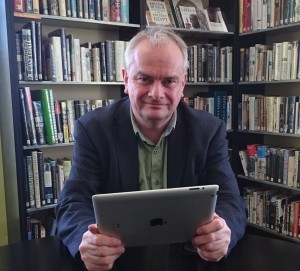 Jeremy Hilton ready to use his tablet computer at Gloucester Library

Gloucester’s main library in Brunswick Road is to get free public access Wi-Fi in the New Year, says Cllr. Jeremy Hilton the Liberal Democrat parliamentary candidate for Gloucester. It is anticipated that free Wi-Fi should be operational by the middle of January.

Jeremy Hilton said: “I have made enquiries at the county council about the lack of free Wi-Fi in Gloucester’s central library.

“It is unfair that this service is provided at Cheltenham central library, but not in Gloucester. The quality of service provision in both central libraries should be comparable.

“There are free internet access desk top computers in all libraries, which the Lib Dems introduced when I was the cabinet member. It is time that free Wi-Fi is also available.

“The good news is that the county council has recently gone out to tender to install public Wi-Fi provision in Gloucester Library. The county council tell me that it should be operational by the middle of January. I hope they meet this deadline.

“Many people now have a tablet computer. Being able to use such a device in Gloucester Library would be a welcomed additional service.”